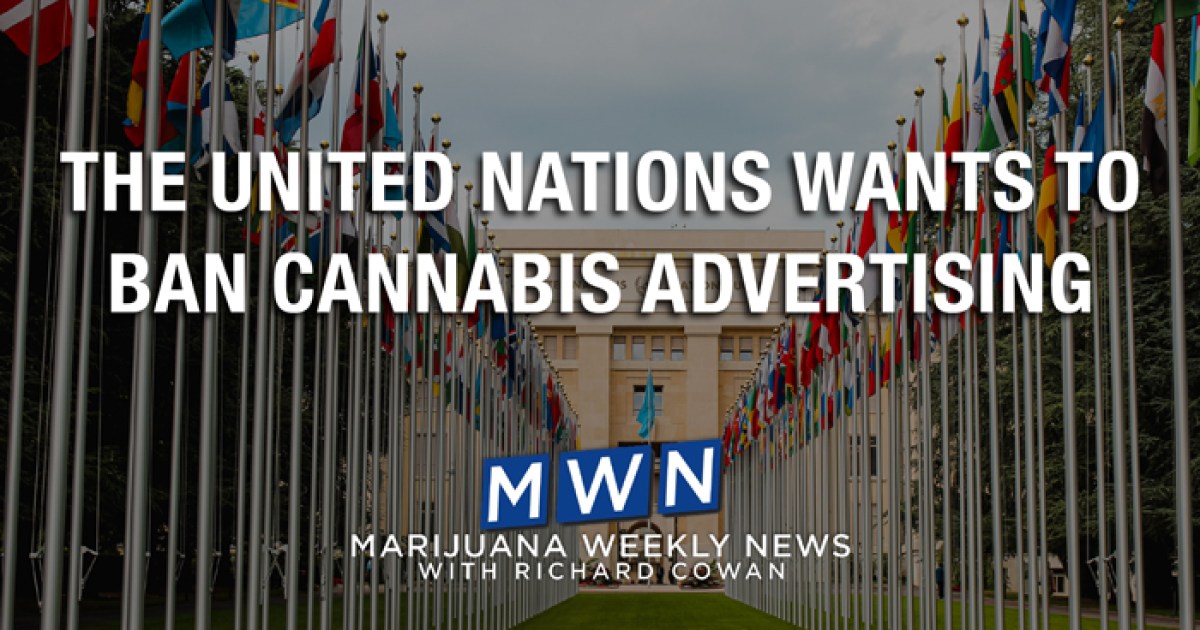 The United Nations serves a number of useful roles, but it is always important to remember that its founding members included Stalin’s Soviet Union, succeeded by Putin’s Russia, which, along with Communist China, holds a permanent seat on it’s “Security Council”. In fact, the UN members include virtually all of the world’s nastiest dictatorships and kleptocracies.

I bring up these unpleasant facts for context because this moral sewer is now telling us that the free countries of the world should ban cannabis advertising.

Well, they have “evolved”. It still opposes medical cannabis, but right now they are just desperately trying to ban retail advertising. And it still has its American supporters.

In a previous report, the INCB complained, “In January 2002, the Government of the Netherlands decided to make cannabis herb available in pharmacies as a prescription drug in the form of “magistral” preparations (made by the pharmacists themselves) and “extemporaneous” preparations (made by the pharmacist for each individual patient). The Board is concerned about the use of cannabis in such forms being authorized before research into the medical properties of that drug is finalized.” (Paragraph 497)

June 26, which also happens to be my birthday, is the UN’s  “International Day Against Drug Abuse and Illicit Trafficking.”

If you click on that link you will find a photo, “A staff member of the Liberia National Police Anti-Drug Squad reviews the municipal dump outside Monrovia, Liberia, where they are burning nearly 400 kg of marijuana and other drugs that were confiscated between 2011 and 2012.”

The man is wearing a shirt saying, “Anti-Drugs.” Liberia has lots of problems, but I seriously doubt that marijuana is one of them. Marijuana prohibition in desperately poor countries like Liberia that lack a functioning criminal justice system simply creates opportunities for systemic injustice and more corruption.

See “Profiles In Prohibition: The United Nations Office on Drugs and Crime”.

In fairness to the world’s dictatorships and kleptocracies, the United States and other Western democracies have been among the worst hypocrites.

And until the American people voted again and again against marijuana prohibition, the US used these UN reports to lie to us.

From speech of Antonio Maria Costa, Director-General, United Nations Office at Vienna and Executive Director Office on Drugs and Crime At the International Symposium on Cannabis in

“Like for other illicit drugs, cannabis is a global problem not simply because it is traded everywhere, but because it cannot be countered by any single nation…

Indeed, this sharing of knowledge may help those who tend to under-estimate and under-represent the dangers posed by abusing cannabis, to appreciate our point of view.”

Meanwhile, back in the real world, the UN has no legal authority to enforce a ban on cannabis advertising. Ironically, the UN’s New York building is just a few blocks from Madison Avenue in a city that is about to become the cannabis capital of the world. Who’s going to win that battle?

However, “Experience should teach us to be most on our guard to protect liberty when the government’s purposes are beneficent. Men born to freedom are naturally alert to repel invasion of their liberty by evil-minded rulers. The greatest dangers to liberty lurk in insidious encroachment by men of zeal, well-meaning but without understanding.” – Justice Louis Brandeis