When I need information about recordings, I go to Discogs. At Discogs, Kevin Gray has more than 2500 entries. That’s as good an indicator as any of the amount of ground he has covered in his career so far as a creative participant in the recorded-music art known as mastering. Since starting out in the early 1970s, in Los Angeles, he has worked for all the major music labels and many independents, in all music genres.

At one time, behind-the-scenes jobs like Gray’s were anonymous and technicalnot really viewed as real creative work. When the Beatles started recording for EMI, audio personnel wore white lab coats. No one knew their names. But as the culture of recorded music became more varied and sophisticated, listeners became more aware of the contributions made by people behind the scenesstudio musicians and especially engineersto the sound of the music they were hearing. By the end of the 1960s, most people knew that the Beatles worked with a guy named George Martinand that he was called the producerat a recording studio in London called Abbey Road, to create the music they heard and loved. Today, most fans of the music know the name Geoff Emerick, who served as the Beatles’ recording engineer.

Today, Kevin Gray’s name is very well-known, especially among vinyl-record fans, as is his reputation for excellent sonics. Ia member of that clanlook forward to listening to albums he has remastered: “Tone Poet” reissues of classic Blue Note records, the earlier, similar series from Music Matters, and LP reissues from Craft Recordings, Intervention Records, Resonance Records, Rhino Records, Speaker’s Corner, and others. The odds are very good that any LP he’s involved with is going to sound fabulous, or at least as good as the source material (often recorded on aging analog tape) allows.

Not all the recordings he works on are reissues. Indeed, in 2016, I had the pleasure of sitting with Gray in his mastering room as he worked his magic, cutting an LP lacquer for my own record, Tight Lines. Recently, I took time to catch up with Kevin, learn about his approach to mastering and cutting LPs, and hear about the new, all-tube recording studio he built from scratch and installed next door to his mastering studio.

Sasha Matson: “Mastered by” is a term some listeners may see but not fully understand. Please tell us what it means.

Kevin Gray: When I got in the business, mastering was cutting a phonograph record. Now there’s sort of “mastered for digital” and “mastered for vinyl.” I am still doing reissues cut from the original analog tapes, and I’m doing all the mastering on that. On a lot of new projects, people send me, quote, “premastered” digital files, which means that typically it has gone through all the compression and every-thing else they do for either CD or hi-rez download. I’ve been able to work with two or three clients who really get it, at other mastering houses. I ask them to do two passes for me. Do your first pass with EQ and whatever, but don’t do the heavy compression, and send me those files to cut the phonograph record from. Then do your other pass to do whatever they want to with that for digital release. And they’ve gotten on board with this.

Matson: As the sort of final stop on the sonic road, Kevin, describe what you are doing prior to the release of finished vinyl or digital music.

Gray: Basically, for me, it’s all about tonal balance. The idea is to try and make the album, if it is indeed an album, flow nicely. And that means that occasionally you are going to have a song that is deficient or has too much of something in a frequency range. You are making adjustments to keep everything balanced, using equalization.

Matson: Is it the same skill set for recording and mastering engineers?

Matson: Volume issues are basic, but so is tonality. As in “Those strings are a little abrasive.”

Gray: Right. That’s all mastering. The recording engineers usually aren’t worrying too much about that.

Matson: Are we past the loudness wars yet?

Gray: No. People are not compressing more than they were five years ago, but I don’t see them compressing less, either. It kind of went to a point where everything is at least 6dB to 8dB off the meters. Sometimes I have to bring it down 10dB, which is just absurd. I understand how it all started, with rap and dance music. But then it filtered into everything. Jazz and classical. It’s ridiculous. I have not bought a CD since 1995, when all the heavy compression started. I’m not interested in listening to compressed music. I can’t get past track 3!

Matson: Do people at record companies understand what you do?

Gray: It depends who they are. The people at Blue Note are amazing. They get it, and they like what we are doing. Other people ask, “What’s the problem doing it from a highly compressed digital file? Lots of records are like that.”

Matson: With the increased adoption of high-resolution digital formats, is there more room for dynamic range than previously?

Gray: I’m still seeing a lot of stuff, for digital download and so forth, released after my part of the process, getting compressed heavily.

Matson: Going back in the alley now: Your first job mastering was for Artisan Sound Recorders, in 1972?

Gray: Yes. Artisan was only mastering, one room at that time. My first job was cutting replacement lacquers on Santana, Chicago, and Bob Dylan. I thought I’d died and gone to heaven! In 1977, I did my first direct-to-disc recording on my own Cohearent Sound label. I started building my own speakers and electronics in the early ’80s. 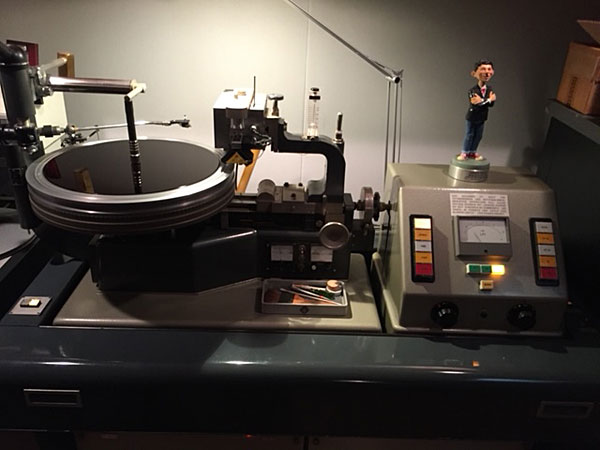 Matson: “Transformerless.” I see that term used as a positive adjective, including on your website about your recording and mastering chain. What is it about transformers that you view as problematic?

Gray: There are some very good transformers, from Jensen and CineMag. Those companies make a big percentage of transformers intended for audio use. But typical transformers used in the ’50s and ’60s and even later introduced phase shift and distortion and reduced bandwidth. So, we decided to eliminate them. Which is a trick. As you get devices talking to each other, it’s very easy to get 60-cycle hum. I’m not talking about power transformers. I’m referring to the interstage transformers that are typically at the input and output points of most pro audio gear.

Matson: What is the most technically challenging part of cutting a lacquer?

Gray: Generally, it’s the disc length: getting the record to fit. If it’s over 18 minutes per side, compromises have to be made. Usually, the level has to be reduced. There are little tricks that can help get more level or time on the disc. For 33rpm, I tell people to try and keep things to 24 minutes per side as a maximum for pop-type music, 22 minutes for jazz. When you get past 22, 24 minutes, you are going to have to reduce the volume. It’s dynamics versus the spacing of the grooves. It’s nice to be able to cut a 2.5milwide groove when you can. On really long sides, I will go down to 2mil, but I try to never go below that (footnote 1).

Matson: Another important aspect is how the cutting head on the lathe is controlled. Some people object to having anything digital in the process. How does this work in your setup?

Gray: The concept of using a computer to control the groove spacing has been in place since the 1950s. It has just gotten more sophisticated with digital control. But this has nothing to do with the audio chain. It’s not in the signal path. It’s just machine control moving the cutter head across the disc. A lot of people are taking a two-track analog machine and using a digital delay to create a split signal that feeds the computer and the cutter head (footnote 2). But in my room, I’m doing it the way it was always done. I have a Studer tape machine that has two playback heads on it (footnote 3). The first head, the preview head, feeds the computer. The second head feeds the audio chain. One reason that went away is, it takes two complete stereo signal paths to do that, as everything you do to program has to be done to preview. So, when people started building consoles for digital mastering, they thought, “Oh, we don’t need preview anymore.” We’re doing it the old-fashioned way, and there aren’t a whole lot of us doing it that way anymore.

Footnote 1: The longest music LP I’m aware of is 90 Minutes with Arthur Fiedler and the Boston Pops. With 45m of music per side, that record had half the groove spacing Gray recommends.

Footnote 2: The computer then controls the groove spacing and sometimes other technical parameters. Cohearant uses a DJR Disc Computer.

Footnote 3: When creating the master for Stereophile‘s Sonata LP in 1996, I prepared a 4-track digital Nagra-D tape with two tracks containing the 20-bit recording advanced in time to feed the preview mechanism. That way, the decoded analog signal that was being fed to the cutter head from the other two tracks would not have to be redigitized, fed to a digital delay, then converted back to analog.John Atkinson