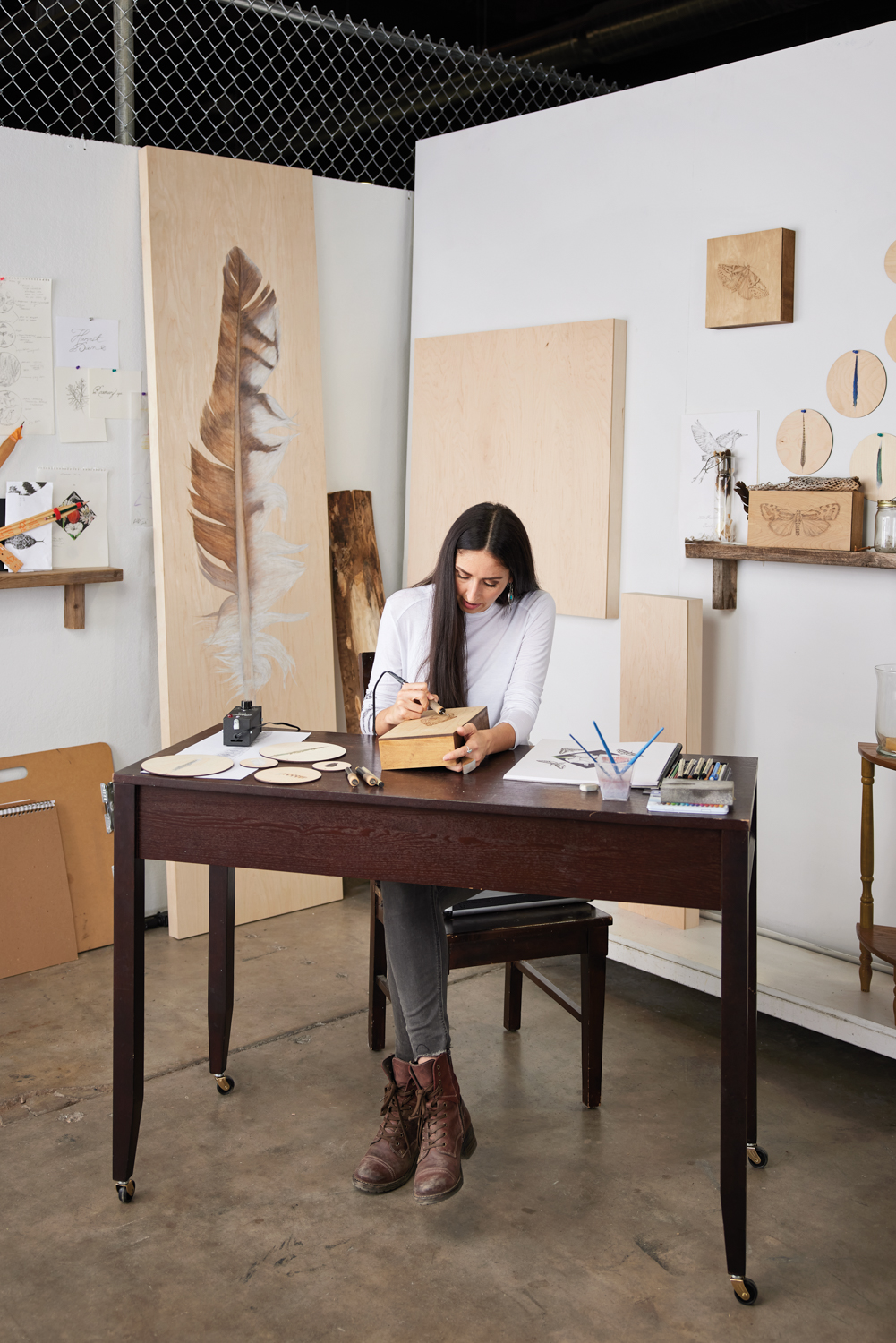 This is a soul calling,” says Alexandra Bowers, whose pyrographic artworks have garnered attention from local curators and collectors alike. Born and raised in Scottsdale, Bowers has witnessed the region “grow outward, not upward,” and watching the landscape paved over for development has inspired her work. “I’m on a mission to educate people and create an emotional connection with the natural world,” she explains.

From her studio at Megaphone PHX, a multidimensional arts venue established by muralist Andy Brown in the Warehouse District, Bowers draws local flora and fauna—night-blooming flowers, seed pods, hawk moths and diamondbacks among them—with a biologist’s eye. Each work is so finely rendered that her medium, a soldering iron, may come as a surprise. In fact, it was something of a revelation for her too. “Pyrography found me,” she says, recalling the aha moment of watching a soldering artist at an outdoor market in Italy.

Bowers begins each piece as a pencil sketch before burning the image into a maple or birch wood panel, hand-crafted for her by fellow artist Tony Zeh. “Then I start itching to add color,” she says of the next step, in which she works wax pigments into the wood to create a watercolor-like effect.

The artist’s work is, in essence, an ongoing conversation with others. Her solo show at Mesa Arts Center, “A Murmuration of Found Feathers in Flight,” featured over 800 pieces based on shared photographs. “I asked my community to send me photos of feathers from hikes and errands,” Bowers says. “I wanted them to get outside, look at their world, tell me the story of when and where they found the feather, and what it represents.” Communication is also at the center of her upcoming group show, “Art in Medicine,” a collaboration between artists and medical researchers organized by Bentley Gallery and the Phoenix Biomedical Campus. “As artists, our job is to work with the researchers and bridge a narrative with the public to break down complicated science,” she explains.

While conversing with her community is central to Bowers’ work, it is times of solitude that often bring about inspiration. Whether hiking a favorite local trail or taking her goldendoodle, Lincoln, for a walk, time in her treasured desert landscape always reveals new ideas. “Outside, I’m in a place of meditation,” she says. “That’s when creativity strikes.”