Kathryn Bradley-Hole selects some of the many highlights of the RHS Chelsea Flower Show, which after three years returns to its traditional May slot.

Appropriately, in the year that celebrates both The Queen’s Platinum Jubilee and Country Life’s 125th anniversary, the 2022 RHS Chelsea Flower Show’s overriding theme is the romanticised English rural landscape. Among the garden exhibits, there are hawthorn hedges galore and dozens of ‘woodland edges’ verdant with ferns, buttercups, granny’s bonnets and froths of cow parsley. There are gurgling brooks, whispering birches and wind-blasted pines rising among great boulders. Prepare to be drawn into rural scenes that suggest George Eliot’s Silas Marner, with its ‘nutty hedgerows’ and ‘orchards looking lazy with neglected plenty’.

The prettiest show in years? Quite possibly

The months leading up to the show are always a time of anxiety for exhibitors and nurseries and a relentlessly dull and cold spring can be challenging. Thankfully, that didn’t happen this year and recent weeks of mild and sunny weather have enabled the 2022 show’s exceptionally large number of deciduous trees and hedges to unfurl well in time, with shaggy green abandon. With fine trees, cascades of apple blossoms and flowery meads, this could be the prettiest show in many years.

Indeed, one of the most charming of these pastoral evocations is inspired by the work of Eliot’s friend, designer William Morris (1834–96). Ignoring the irony, Morris espoused the then new ideology of Marxism, as his luxurious papers and fabrics evoking English flora earned him a fortune decorating the houses of Victorian industrialists and the burgeoning bourgeoisie. The Morris & Co garden, designed by Ruth Willmott, draws upon two of his most famous and still popular designs: Trellis (1862) and Willow Boughs (1887). 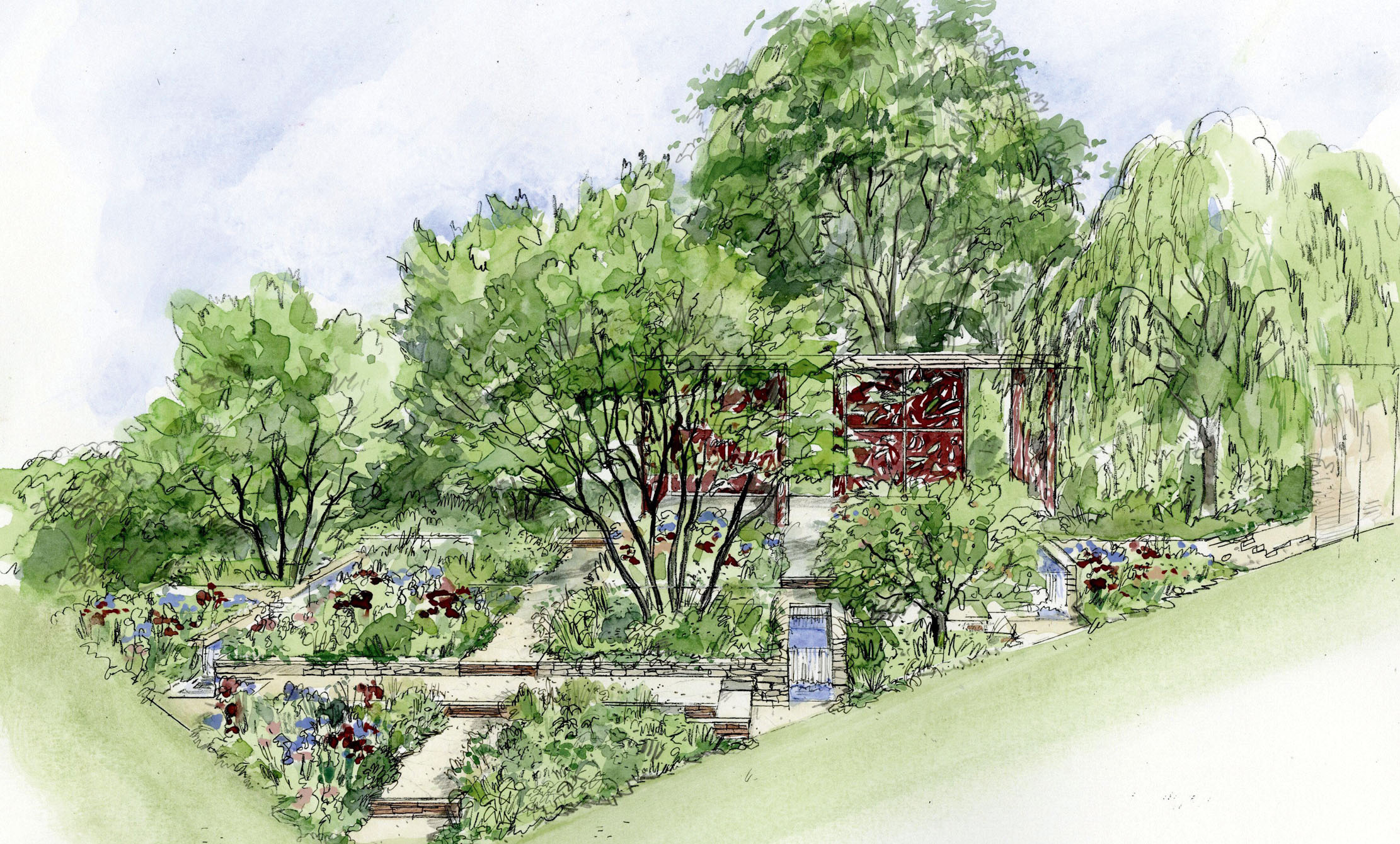 The ground plan is laid out according to Trellis, with criss-crossing straight paths and waterways carving the site into a series of square planting beds. Willow trees, shaggy hawthorn hedging and blossoming crab apple rise above herbaceous flowers in earthy reds, warm apricot and ocean blues, recalling the rich colours of Morris’s furnishings. In its stylish simplicity and adaptability, Mrs Willmott’s enjoyable garden has various take-home ideas. Not least, the laser-cut metal roof of the garden’s pavilion. Featuring the Willow Boughs pattern, it casts that elegant, leafy design in ephemeral shadows whenever the sun shines. 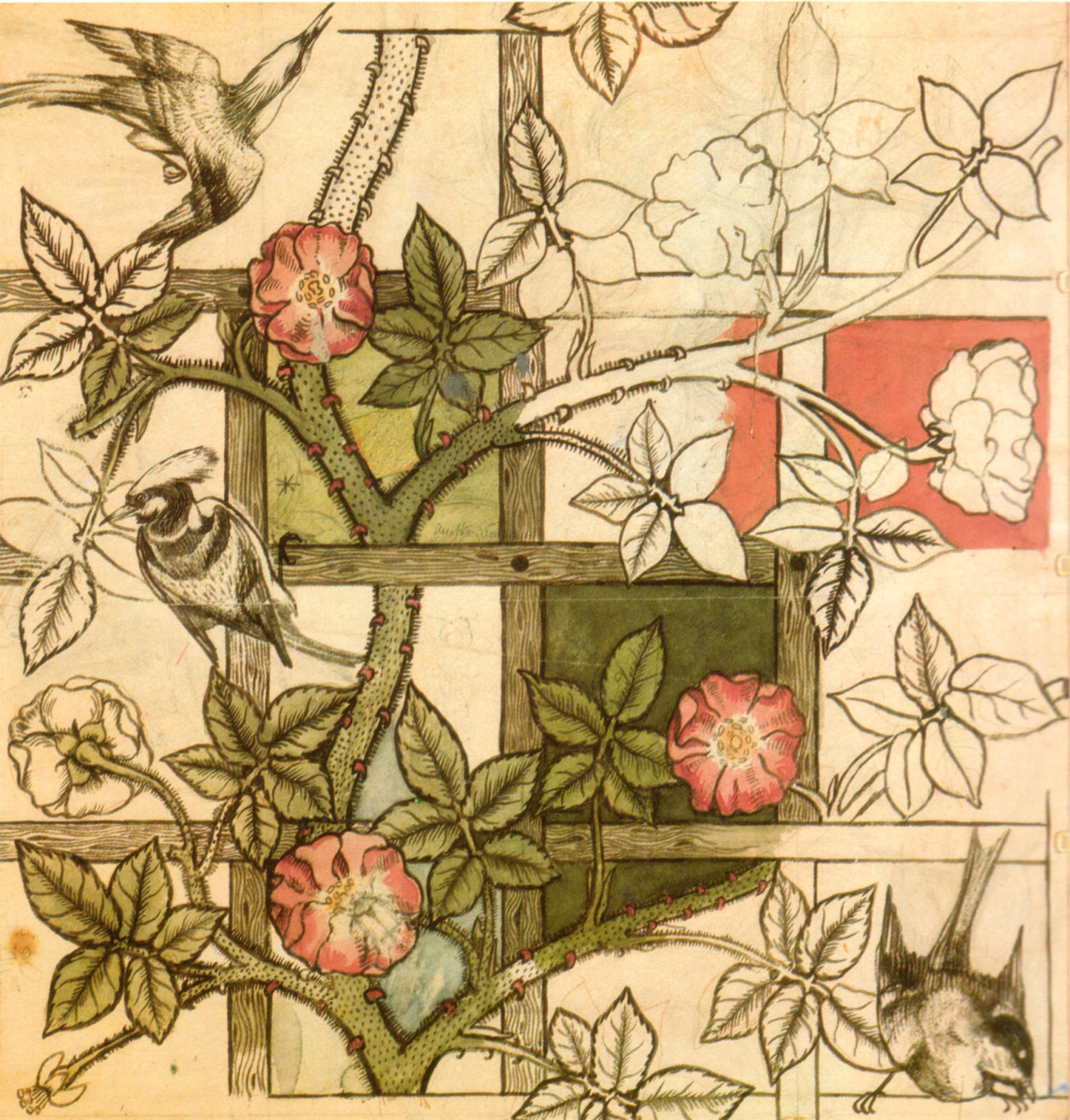 Morris’s original drawing for Trellis was the inspiration for the Morris & Co design.

A Garden Sanctuary by Hamptons

A contrastingly unstructured, but alluring scene is presented in A Garden Sanctuary by Hamptons, from Tony Woods of Garden Club London. Here, an angular, garden-studio building is placed among a mini-treescape of pines and birches, accessed via a path of boulder-sized stepping stones traversing a gurgling stream. 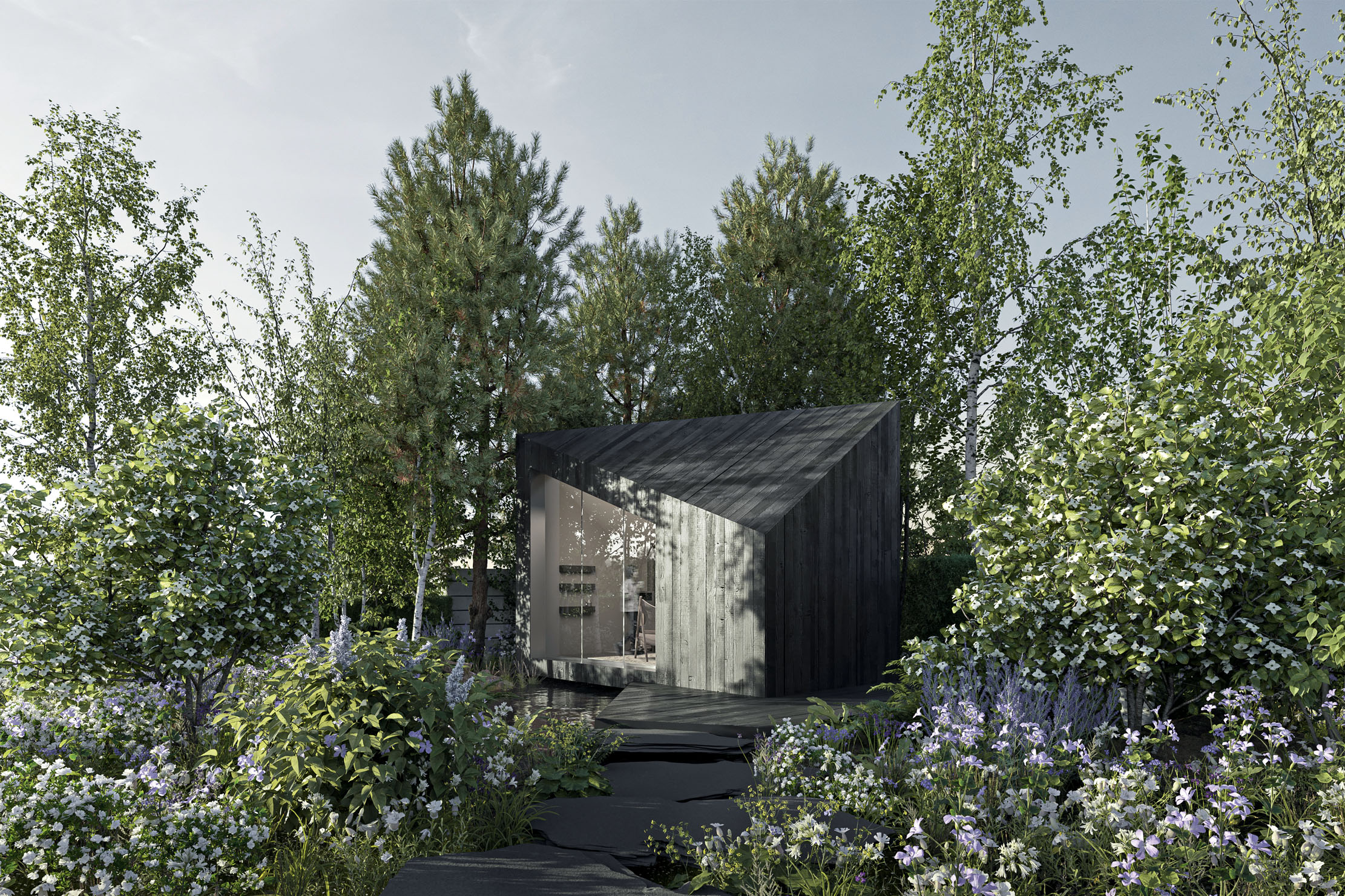 Escape to a mini woodland in A Garden Sanctuary by Tony Woods, for Hamptons

Ferns and sweet woodruff contribute to the greenery at the notional woodland edge, with herbaceous plantings in soft pastel hues. ‘The garden is a place of escapism and creates the opportunity to be distracted by Nature, stimulating our senses through the power of plants,’ Mr Woods explains. In such a garden, it is easy to imagine wren and robin singing their hearts out in the May dawn.

For an undeniably dramatic evocation of wilderness, look no further than the Medite Smartply garden, the centrepiece structure of which, some 20ft tall, suggests a huge, craggy piece of rock, a chunk of karst landscape complete with cascading waterfall and a cave entrance. The creator Sarah Eberle, an imaginative designer who has brought a string of interesting concepts to the show over the years, has used the sponsor’s own MDF building materials, carved and layered in amoebic shapes to produce the vertical ‘rockwork’, hung with mosses and vines. 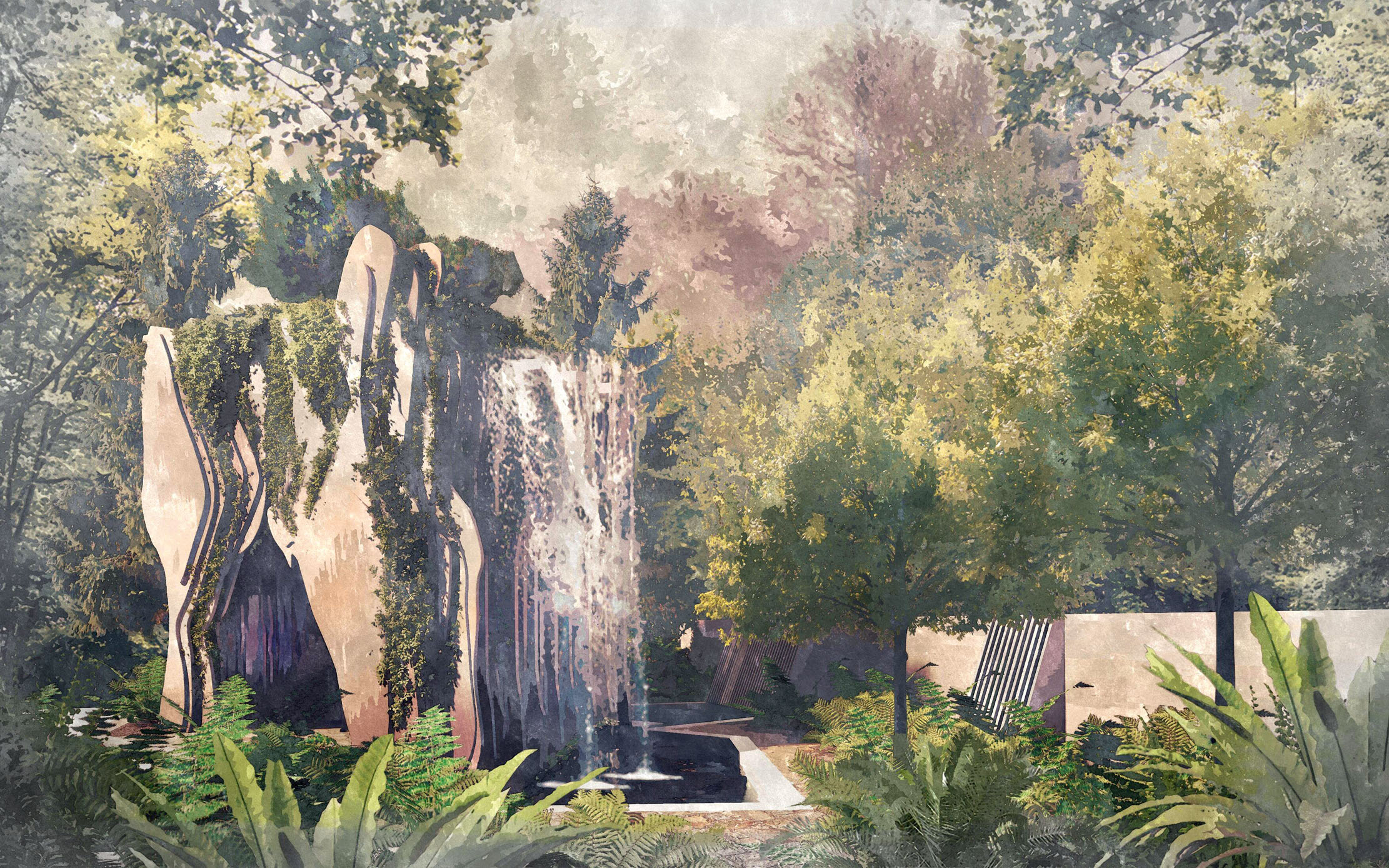 The ‘woodland edge’ greenery has plant connoisseurs in mind, with species such as Disporum longistylum (a Chinese Solomon’s seal), the eastern-US umbrella-leaf plant Diphylleia cymosa, and another showy-leaved American species, Podophyllum peltatum.

Among the compact, square plots laid out for the category of Sanctuary Gardens (a mysterious title, but, basically, the spaces are simply smaller plots than the Main Avenue’s big Show Gardens), Tom Hoblyn has created for the Boodles Travel Garden a confidently curvaceous design, to be viewed on two sides. An exaggerated meander of water, echoed by a path beside it, cuts through the heart of the plot, between luxuriant planting beds that include exotic species from Asia and the Americas. 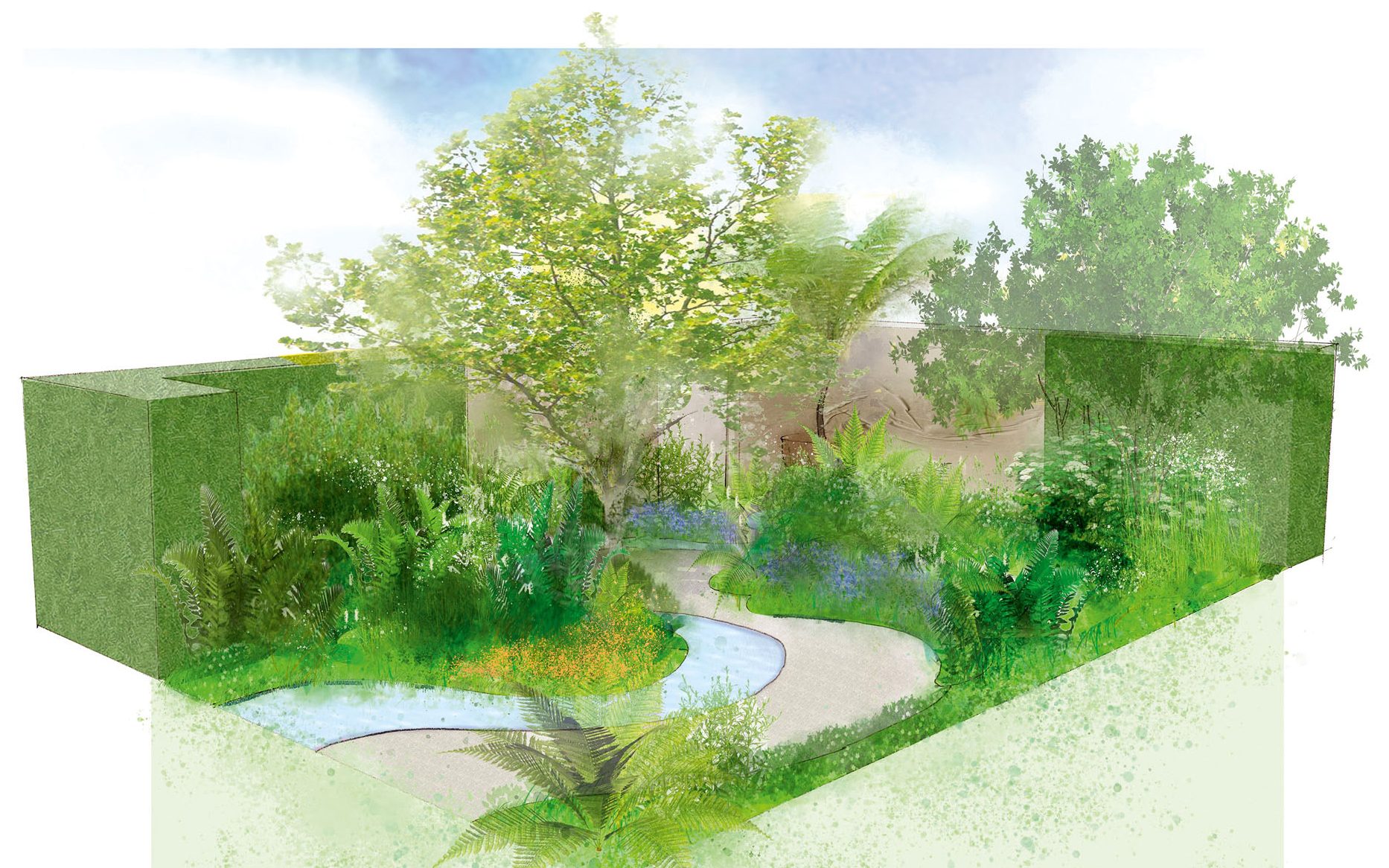 Notwithstanding the garden’s stated narrative about travel to foreign lands, its key appeal is the strength of its extremely simple, flowing design and the mounded beds that take its curves into the third dimension.

The Perennial Garden With Love

‘Gardens are a gift of love,’ says designer Richard Miers, ‘giving pleasure to those who create and nurture them as much as to those who visit and enjoy them. The Perennial Garden With Love, made by Mr Miers for the professional gardeners’ charity Perennial, leads us away from notions of wilderness and forest fringes into the almost disappeared world of classic, symmetrical Chelsea gardens. And why not? 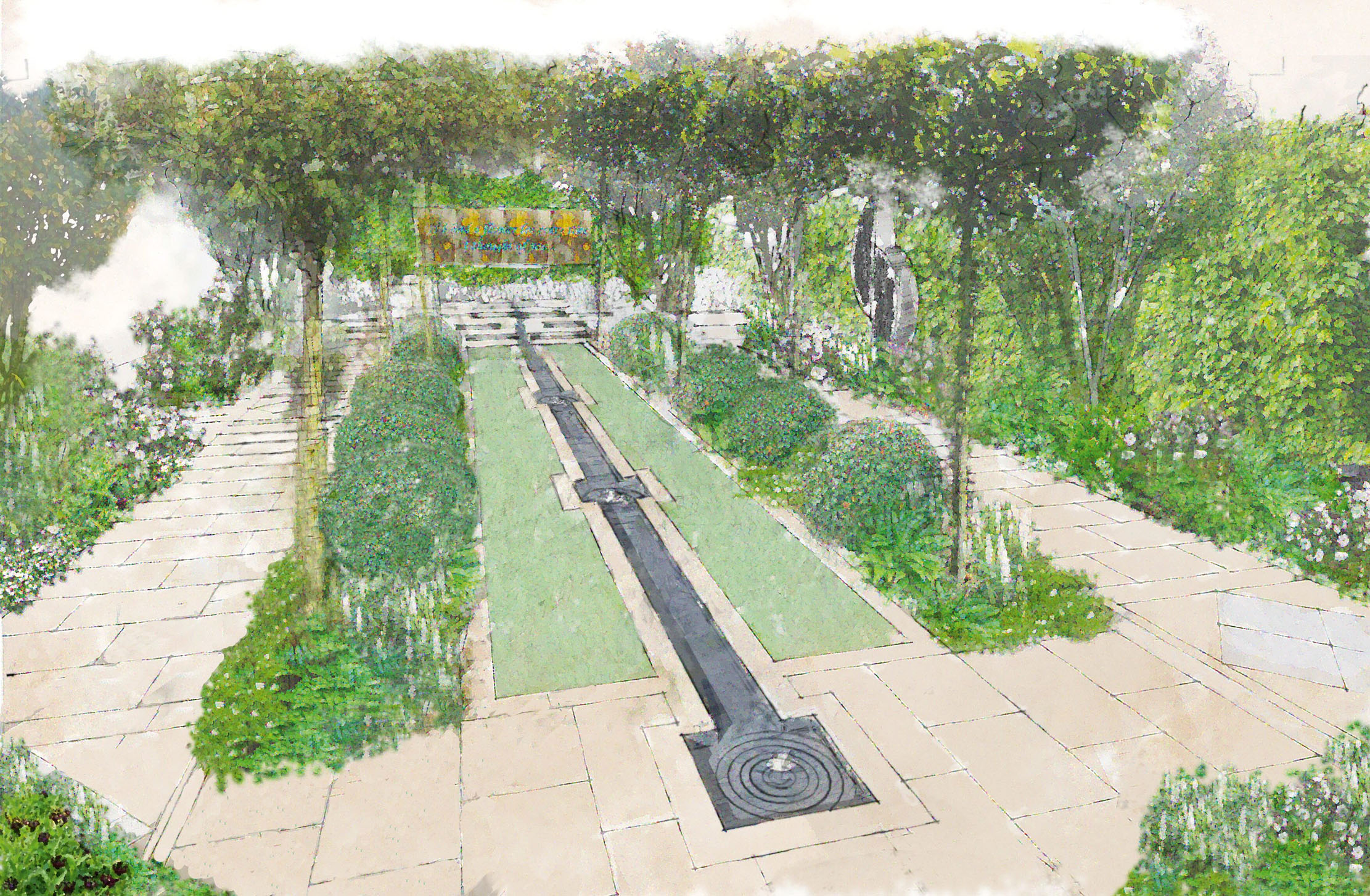 Somewhat unusually for Chelsea these days, it doesn’t come with preachy messages attached. Instead, it uses centuries-old design classics, such as a central rill marking its length with evenly spaced fountains. Beside the rill, there are stretches of the sort of fine lawn you could enjoy strolling on with bare feet. Hawthorn (Crataegus monogyna), this year’s most popular tree, is used here, not as hedging, but as clear-stemmed, flat-topped specimens along the lawn margins, underplanted with easy topiaries and pretty herbaceous flowers. A flagstone perimeter walk is wide enough for two, giving access to comfortable places to sit. It, therefore, fulfils its aims, being a garden made for people, although it is clearly also a real ‘gardener’s garden’, reflecting the charity’s focus and demonstrating time-honoured horticultural skills. Undoubtedly, this simple classic will be a crowd pleaser; I wouldn’t be surprised if it’s also the one that most visitors would actually like to own.

The Great Pavilion, the sculptures, the trade stands and beyond

Throughout the show and particularly in the Great Pavilion, special floral tributes mark The Queen’s Platinum Jubilee and her long-standing support of the RHS. The Bullring Gate, facing the Thames, sets the tone, being garlanded with an exceptional floral design by Lucy Vail, using English-grown foxgloves, sweet peas, geraniums and irises. The displays for the 2012 Diamond Jubilee were spectacular; perhaps we’ll see something that trumps even that? 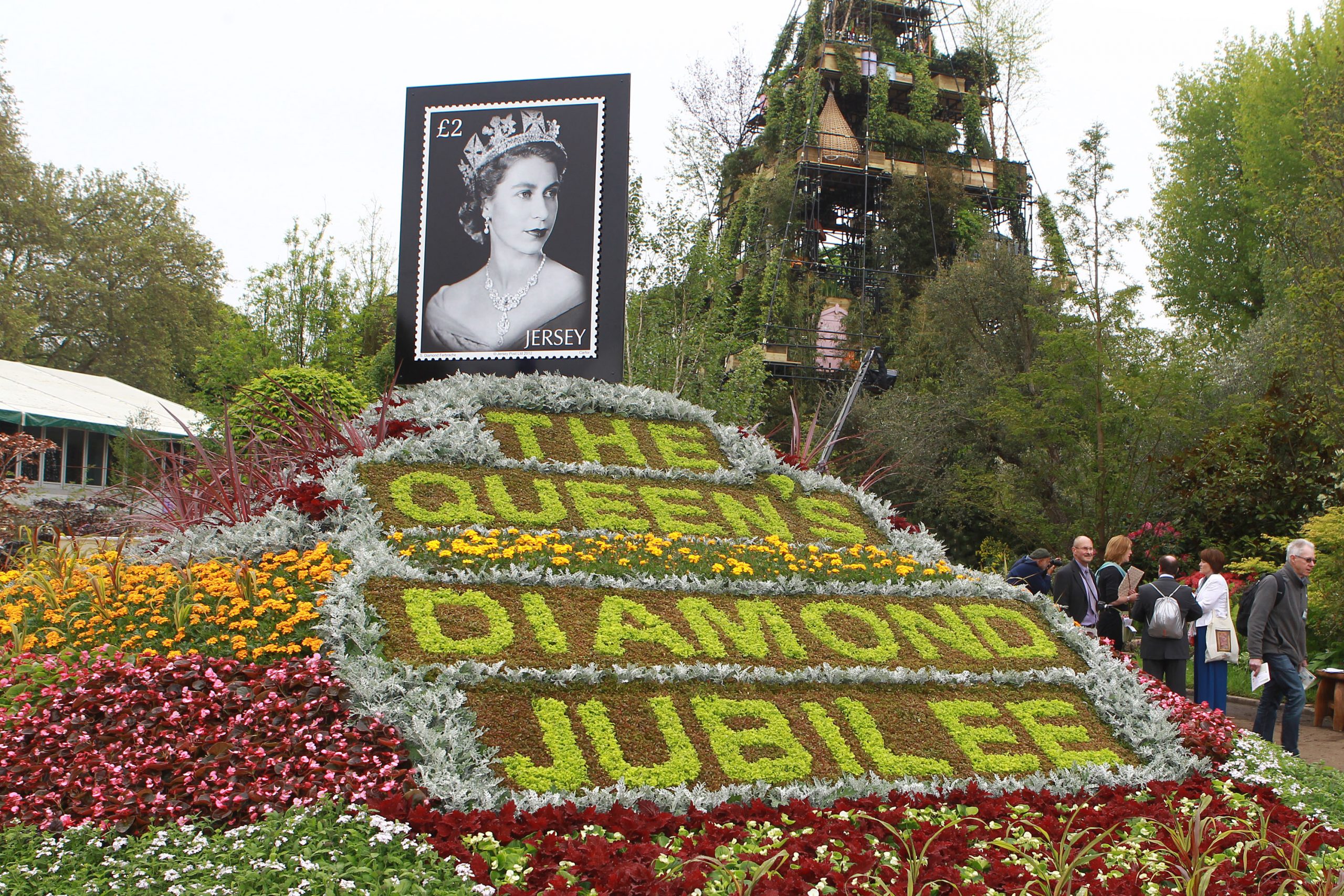 The Chelsea Flower Show at Royal Hospital Chelsea in 2012.

Spectacular aeoniums and agaves feature in the creative display by Surreal Succulents, in the Great Pavilion. These sub-tropical plants, with their geometric formations, have captured the interest of a new generation of gardeners, largely owing to dramatic photographs posted on Instagram.

Hostas in their almost infinite variety have resurged in popularity recently. Among the Great Pavilion displays, Hogarth Hostas brings part of its National Collection of small and miniature varieties and Sienna Hostas displays the best of its 1,400-plus collection. 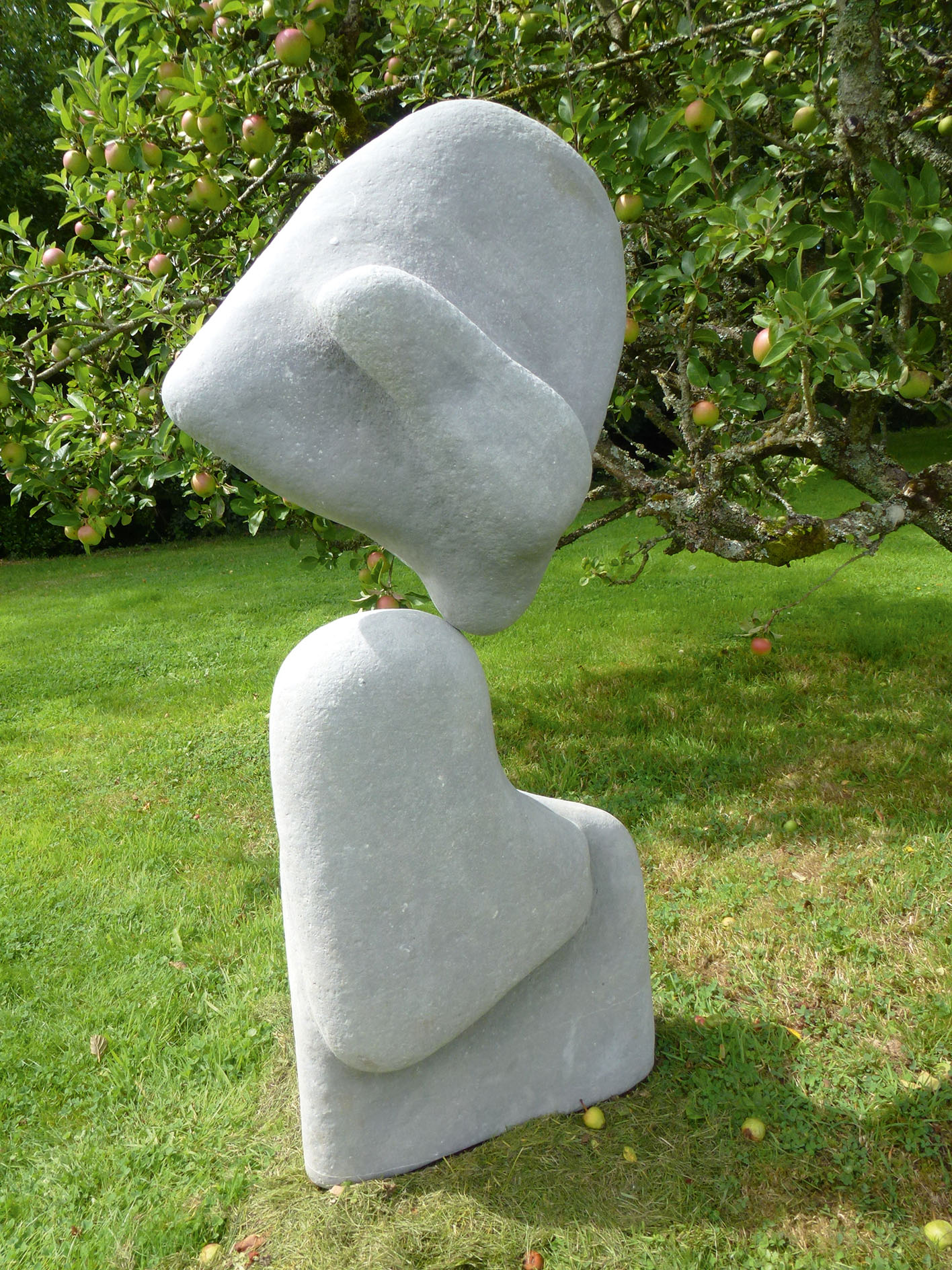 Notwithstanding the late-summer glories in last year’s memorable September show, the most recent event was three years ago. Now, tradestands are back in full sail, offering a multitude of shopping opportunities, from Japanese topiary tools to elegant furniture and spectacular glasshouses by makers such as Hartley Botanic, which launches its latest ‘Grow and Store’ combined greenhouse-shed in the Wisley range. Eye-catching ornaments include Adrian Gray Stone Balancing Sculptures  and the ever-popular sundials and mirror- finish sculptures by David Harber.

The RHS Chelsea Flower Show, sponsored by The Newt in Somerset, will be held at the Royal Hospital, London SW3. May 24–25: RHS members only. May 26–28: members and non-members — www.rhs.org.uk/chelsea