Are well-heeled audiophiles ready for a knob-free future? Gryphon Audio Designs thinks so. In contrast to Gryphon’s volume knobdominated Pandora preamplifier, the Danish company’s new Commander offers nothing on its bold front panel to grab or turn.

Instead, there’s a large, extra-thick, triangular glass protuberance that extends dramatically below the chassis’s vertical dimension. That’s where you’ll find an “on/off” button, the main unit’s only physical switch.

A 4.3″ TFT capacitive touch screen incorporated within that triangular glass panel controls all this preamp’s functionality. The pushbutton remote control duplicates many but not all operations. More about that later.

The Commander is an unusually large, heavy, two-chassis design featuring an 84lb power-supply chassis and a 67lb signal/control chassis. Each chassis weighs more than many powerful power amplifiers and measures approximately 18″ wide × 9″ tall × 17″ deep. (The control chassis is slightly deeper.)

All this mass and real estate just to provide some attenuation/ gain/buffering and to swap among its six inputs? Yes.

Consider the power supply. Within its massive aluminum chassis reside four custom-made 36VA toroidal transformers, two per channel, plus a large power-supply capacitor bank for each channel. Two of the four transformers (one per channel) are reserved for upcoming Gryphon source components; the well-considered thought is that if you’re in on the Commander, you’ll be in on the company’s source components, too, and this way you won’t need to purchase another separate power supply. Much of the signal-processing chassis weight goes to damping and resonance control. 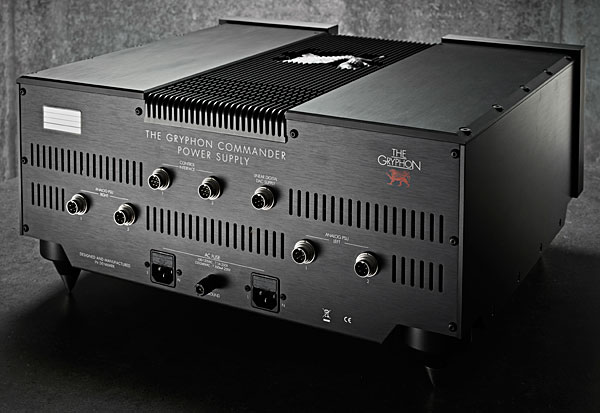 The not-quite-40-year-old company has retained much of what went into the Pandora preamp, including its dual-mono layouthere in a single chassis, there in two separate chassis (four all together, including the Pandora’s two outboard power supplies)and its class-A input buffer consisting of just two transistors and a single resistor, implemented with zero global feedback. That, the company claims, produces sound that’s “exceptionally transparent, fast, natural and open.” Of course, that’s what they all say! Gryphon claims the Commander improves upon the Pandora’s widely recognized exceptional performance (I’ve not heard it), in part due to a new voltage reference, used in connection with the analog series regulators that supply the amplifier stages, that’s said to be 50 times lower in noise. A pair of fully discrete, linear power supplies serve each channel’s analog circuit, while a third feeds the digital control system; each connects to the control unit with its own umbilical. Gryphon avers “absolute” mechanical separation and electrical isolation between analog and digital sections.

Experience has made me a believer in the sonic effects of vibrational energy on electronicsincluding solid state electronics. The spikes are also necessary to prevent the base of that front-panel triangle from becoming a fifth contact point.

Heatsink fin arrays on both the power supply and signal-processing chassis accentuate the dual-mono architecture and add a pleasing visual accent. Both arrays are topped by three-dimensional Gryphon insigniasdragonswhich many will appreciate. Those who find them Harry Potter hokey can easily hide them under shelving.

Presentation, installation, and setup
Before leaving for Georgia to participate in a major customer installation, Gryphon CEO Jakob Odgaard and sales director Rune Skov deposited in my garage a pair of heavy pressboard crates. Rather than wait for their return, I rolled the two crates into my room and unboxed them easily, thanks to innovative packaging that allows you to unlock the side panels and remove the components that way rather than excavating precious heavy metal vertically from cardboard boxes or crates.

Not to worry: If you purchase this $63,000 preamplifier, your dealer will attend to the installationso I’ll skip the rest of the description of what it took to hoist the control unit onto the HRS SXR rack shelf other than to write that Gryphon has devised a unique methodology to accomplish it without scratching or marring surfaces. I’ll aver that for this much money, buyers deserve a top-quality, out-of-the-box presentation, and Gryphon delivers it. No need to elaborate further. I left the power supply on the flooror rather, on a Symposium Acoustics platform that sat on the floor. 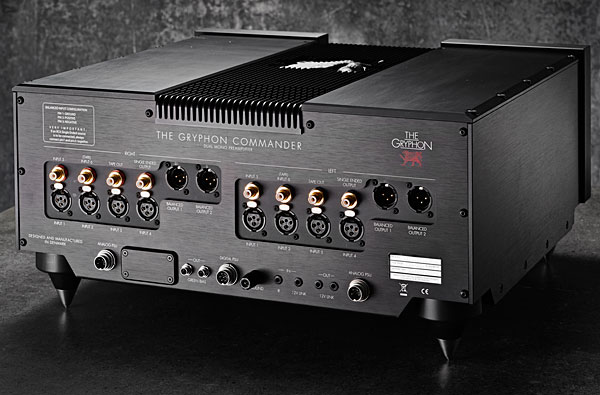 Rear panel facilities include four pairs of balanced, gold-plated Neutrik XLR inputs and two pairs of Gryphon’s own Teflon-insulated RCA inputs, one of them labeled “(Tape)”; two pairs of balanced (XLR) outputs and one single-ended output pairplus another stereo output pair labeled “TAPE.” (In other words, there’s a tape loop.) There’s a USB jack for firmware updates, umbilical connectors for the three power-supply connections, 12V triggers in and out, and a pair of “Green Bias” connectors; when used with Gryphon amplifiers, Green Bias allows automatic switching among various levels of class-A bias. The rear panel layout is neatly configured with well-spaced jacks, aided by the additional real estate afforded by the generously sized chassis. 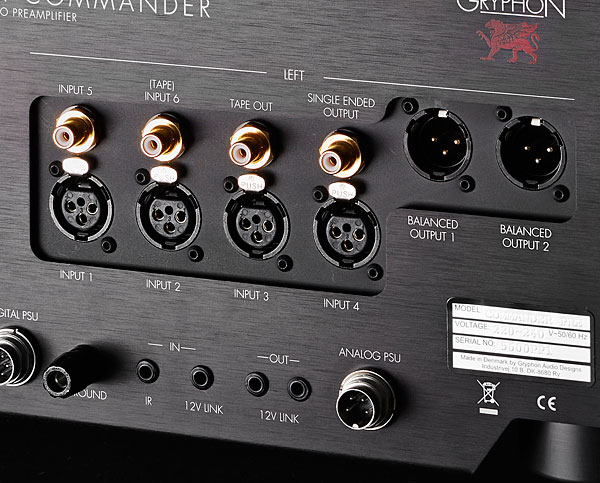 The Commander’s insides include, in addition to the aforementioned two transistors per channel, class-A, discrete input buffers, an 85-step, microprocessor-controlled volume control incorporating Charcroft Z-Foil Audio ultraprecision-series resistors and ultralow-capacitance relays. Also inside is fully discrete, balanced, dual-differential, class-A line-stage circuitry followed by a symmetrical, class-A current-amplification stage, all on four-layer PCBs with copper traces up to 70µm thick, plus DC-servo coupling and premium Mundorf MCap ZN-foil capacitors used for local power supply decouplingall said to result in improved transparency and spatiality. The internal layout is said to have been optimized to minimize wiring.

I ran the Commander “balanced out” to the darTZeel NHB 468 monoblocks using TARA Labs Zero interconnects. Configuring the preamp is straightforward, especially if you’ve ever set up a home theater receiver. Touch the glass panel’s virtual “menu” button and select among 10 options including input-level matching, input naming, AV-input bypass (for home theater use), display intensity, and a few other settings of lesser importance, at least for the purposes of this review. Adjusting LR balance requires you to go into the menu system and hit “Volume”; you’ll then see a virtual slider. You can’t adjust balance from your listening position, which turned out to be the Commander’s most significant less-than-ideal feature. I suppose that, for $63,000, I’d also like to see a polarity inversion switch, assuming it wouldn’t compromise sonic performance.

The TFT screen incorporates a proximity sensor that automatically switches format depending upon where you are standing. When you’re more than a few feet away, the screen indicates the volume and selected input in large numbers and letters. Hit “Mute,” and an “X” covers the volume numbers.

Approach the screen, and it changes to display smaller characters and more detail, showing the input lineup vertically along the screen’s left side, the volume number and “up”https://www.stereophile.com/”down” icon on the screen’s right side, and “Mute,” “Monitor,” and “Menu” in the center. Lightly pressing any of these virtual buttons produces the desired change in volume, input, etc. Which means that, when you’re seated in your listening position, you see only the chosen input and not a full input listing, so until you’ve got them memorized by number (which won’t take long), you’ll be toggling through to find your choice. Again, not a big deal, but I’d bet on firmware version 2 they’ll give you the option to change the screen view and perhaps also let you adjust balance from your seat.

The remote control is a nicely machined, heavy-in-the-hand device with an angled lower extremity aimed to make it more comfortable to hold (for right-handers at least) and a rubberized bottom pad to prevent furniture scratches. The logical, uncluttered layout obviates the need for backlighting. The top four buttons stacked two and two select “On/STB” (for “standby”; this button is red while the others are white); “Mute”; “Display”; and (tape) “Monitor.” Below those and centered alone are the volume buttons: “Up”https://www.stereophile.com/”Down.” The remote’s bottom half has two rows of three input buttons (1,3,5 and 2,4,6) on the left and an “Up”https://www.stereophile.com/”Down” input selector on the right. The “Display” button lets you choose among four screen intensity levels, “Auto Off,” and “Auto Dim.”