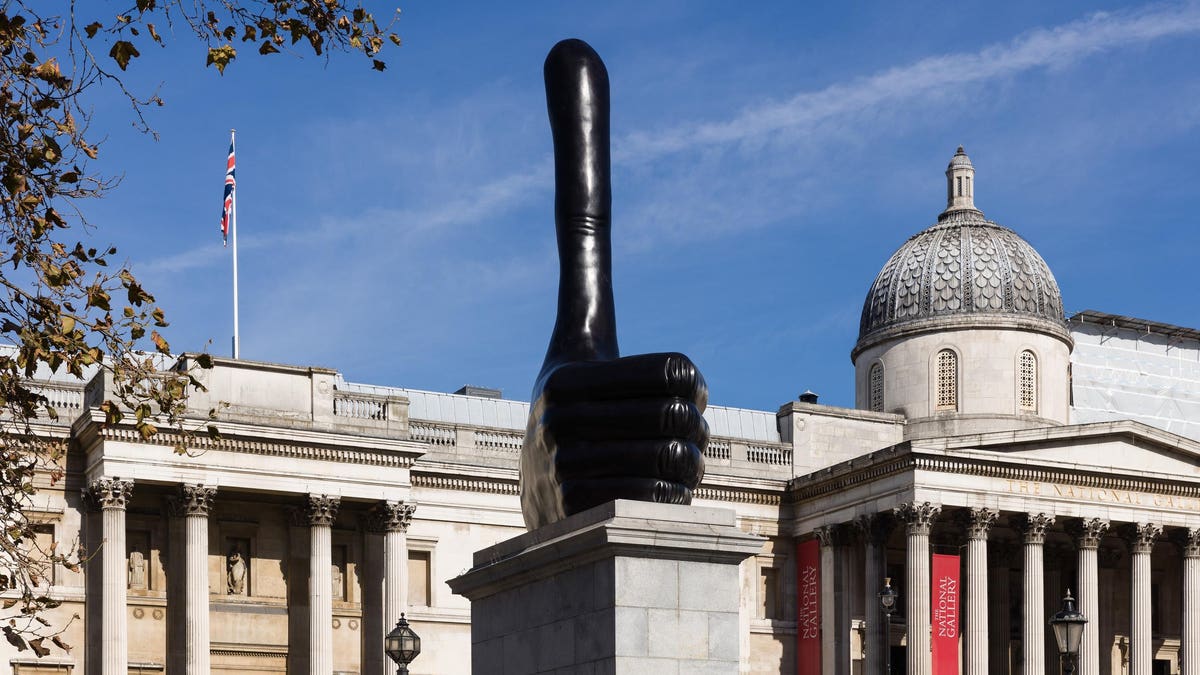 Born in 1968 in Macclesfield, England, Brighton-based artist David Shrigley graduated with a degree in fine art from the Glasgow School of Art. Although drawing lies at the core of his practice, he works in wide-ranging media: sculpture, installation, animation, painting, photography and music. At once preposterous and hilarious, his creations include a dead stuffed kitten standing on its hind legs bearing a handwritten protest sign that reads “I’m dead”, a resting elephant, a man-eating tiger, a rainbow marked with the words “Be nice”, a pointing finger that says “It’s all your fault”, a horn screaming “Please shut up”, a newspaper headline that reads “Nobody likes you” and an artist palette that insists that “Art will save the world”. He remarks, “Art is only art when it is different from the art you have made before. There is no point making the art you have already created because you have already made it. The opportunity to see everything afresh is an opportunity that you have to take.”

Today, Shrigley’s works are in the collections of the Art Institute of Chicago, Museum of Modern Art in New York, Hammer Museum in Los Angeles, Tate London and Scottish National Gallery of Modern Art in Edinburgh, among others. Last year, he was named Officer of the Most Excellent Order of the British Empire for his services to the visual arts. He concludes, “When I make a drawing, I always think of it as an act of association. It is about finding connections between things that already exist. Increasingly, I feel as though everything I make already exists somehow: I am just making a representation of it. The art is trying to find a different association between one thing and the other. Art is not the creation of something new, but the creation of connections between things that already exist.”

Really Good (2016) – Playing with scale, Shrigley enlarges objects and endows them with unusual proportions like this seven-meter-tall thumbs-up sculpture in bronze unveiled in Trafalgar Square for a major public art commission. The thumb is disproportionately long in the hopes that this simple gesture becomes a self-fulfilling prophecy: that things considered “bad” would be viewed with optimism and positivity.

Ostrich (2009) – This disconcerting, surreal headless ostrich standing defiantly upright is among Shrigley’s menagerie of taxidermy creatures that reveal his morbid humor. He explains, “In a philosophical sense, my art is very fatalistic, but hopefully the humor redeems it slightly from being just depressing. And when it comes to death – well, I prefer to see the humorous side of it as you can’t change anything about it anyway.”

The Gallery at Sketch, London (2014-2018) – Following an initial presentation of 239 black-and-white drawings on the walls of world-renowned dining venue Sketch with its candy floss pink interiors designed by India Mahdavi as part of a long-term program of artist-conceived restaurants, Shrigley returned four years later with 91 colorful new works that gave his take on the banality of everyday life.

Egg (8) (2011) – One of a series of large ovoid-shaped, white glazed ceramic sculptures called “egg” in Shrigley’s distinctive handwriting, it is cartoonish and comes with an uneven surface demonstrating the imperfect aesthetic of handmade objects, which draws a parallel with human character. He says, “I like the personality of things being a bit half-finished, of basically having personality.”