Another fashion faux pas. Kylie Jenner is being slammed for wearing Givenchy’s controversial noose-inspired necklace during her visit to Paris Fashion Week, on the same day she outraged fans by donning a dress with a life-like lion’s head on it.

The cosmetics mogul, 25, stepped out for dinner on Monday, January 23, wearing the questionable piece of jewelry, which features a hangman’s knot on one side with a rope-like loop on the other end. She paired the necklace and Givenchy’s sparking pink boots with a bright blue dress.

Hot, Hot, Hot! These are the Sexiest Kardashian Jenner Pictures of 2023

“Kylie Jenner wearing absolutely vile designer pieces in the space of 48 hours is not the one. The first being that horrific Schiaparelli dress and now it’s the Givenchy necklace. Like BRO COME ONNNN,” one fan tweeted, while another added, “Kylie Jenner wearing a noose necklace is disgusting. This woman doesn’t have any shame. Is she picking her outfits on purpose knowing very well they will create controversy?”

The necklace is not a new design and caused quite a debate when it first appeared in the label’s October 2021 runway show.

When the piece originally went down the catwalk, one infuriated user tweeted, “Givenchy shows a ‘noose necklace’ in its Paris Fashion Week show. I guess a swastika, or a model carrying a gun, or wearing a white hood, were all too edgy.” Another person added, “Honestly in which world having a noose hanging on a girl’s neck is fashion? Spring/Summer 2022 dragged way back to 1822 … Young girls and guys don’t need to see this at any stage, especially at Paris Fashion Week.”

Fans were already excited about the Kylie Skin founder’s outfit worn earlier in the day at the Schiaparelli Show. Her figure-hugging black gown featured a realistic life-sized lion’s head sculpture attached to the chest. 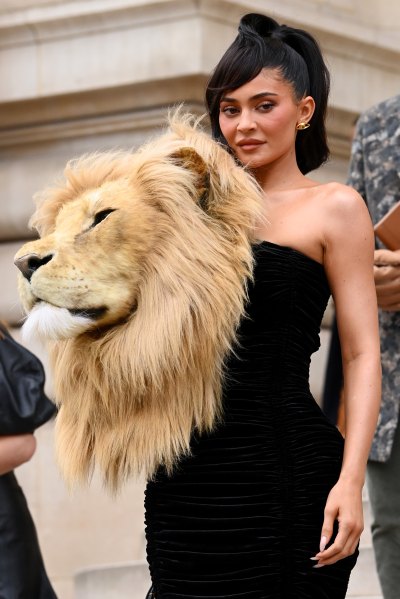 “BEAUTY AND THE BEAST. Thanks @danielroseberry & @schiaparelli, for such an amazing morning. Wow, I loved wearing this faux art creation constructed by hand using manmade materials,” Kylie captioned a carousel of Instagram photos wearing the outfit, calling it “beautiful.”

The post was flooded with critical comments, with one fan writing, “Promoting animal abuse is never okay!” while another told Kylie, “Very disturbing! This is wrong in so many levels!” Another user said “No, no, no, this is 100 percent wrong. Say no to animal cruelty,” as several others called her outfit “wrong on many levels.”

Kylie Jenner Slammed for Wearing ‘Noose-Like’ Necklace at Paris Fashion Week: ‘This Is So Disgusting’