This is it! Kylie Jenner She announced that she Travis Scott (real name: Jacques Bermon Webster II) are changing their son Wolf Webster’s moniker, people are asking one huge question: What is her baby’s new name? While the former Keep up with the Kardashians star hasn’t announced anything yet, fans have spotted various clues and presented their theories.

Why Did Kylie Jenner Change Her Son’s Name?

The mom of two revealed why she named her son Wolf to begin with — and how she instantly regretted it. “We didn’t have a name [when he was born],” Kylie explained during season 2 of The Kardashians. “I thought it was going to just come to us when we saw him and it didn’t. [It was] 24 hours before we had to sign the birth certificate or else they register him without a name and he doesn’t get a social security number. I felt the pressure to choose a name.”

Khloé Kardashian suggested the moniker Wolf, and Kylie liked the initials “WW,” so the new mom used the name Wolf Webster at “that moment.”

“But right after I signed the birth certificate, I was like, ‘What did I just do?’ It’s part of his story, but his name has changed,” Kylie added.

What Is Kylie Jenner’s Son’s Name?

Sister Kim Kardashian During an appearance on April 15, Live with Kelly & Ryan that Kylie was close to settling on her son’s moniker. “There’s one name lingering, but she really wants to make sure. It’s such a big decision, honestly. It’s the hardest thing ever in life to name a child.”

After a Reddit user informed others of Kylie’s March 21 announcement — which revealed she and the “Goosebumps” rapper “didn’t really feel like [Wolf] was him” — social media commenters shared their thoughts on what the baby boy’s new name could be.

“I vote Jack. It was always supposed to be Jacques,” one person claimed. “After the ‘To My Son’ video, there’s no way it isn’t Jack,” another weighed in, referring to Kylie and Travis’ heartfelt YouTube video dedicated to their child documenting her pregnancy journey.

Others pointed out the likeliness of the title since it would match Travis’ birth name. “Since he’s born on 2/2/2022 and [Travis is] Jacques II, I’d go with Jaques Deuce,” a separate fan chimed in, whereas multiple others applauded the idea and even introduced the French word “Deux” as a possible middle name. 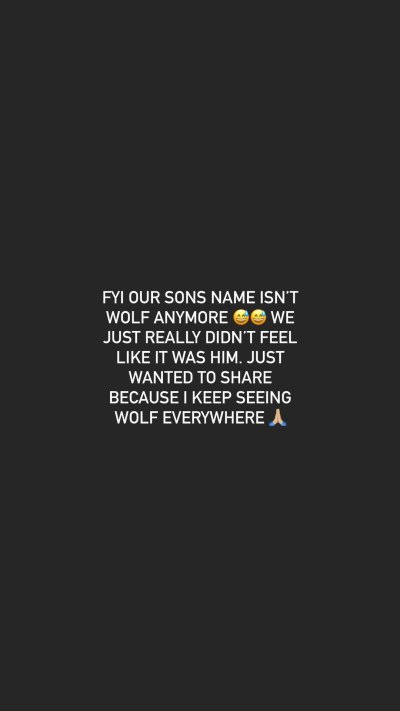 Another large topic of conversation was Kylie’s ex-friend Tammy HembrowShe also has a son, Wolf, and a daughter, Saskia.

“I feel this is because of Tammy Hembrow,” one Reddit user commented below the Jacques enthusiasts. “That’s exactly why,” a separate person replied. “Everyone’s gonna deny that’s [definitely] This is why. She wouldn’t want to look like she’s copying someone. She thought. [people] wouldn’t notice.”

Kylie and Tammy were close friends until February 2019 after reports surfaced claiming that the blonde beauty had allegedly had a fling with Kylie’s ex Tyga During his Australian tour in January that year. Kylie deleted her Instagram account following his Australian tour. When asked about their alleged bond though, Tyga refused to comment and Tammy’s reps denied that she was in any sort of romantic relationship with the rapper at the time.

Aside from the coincidental monikers, one user noted they were “still rooting for Angel,” as the Kardashian-Jenner family and a few famous pals unintentionally sparked rumors that Kylie named her son Angel after revealing his birth in a February 6 Instagram post.

Not only were commenters fueling the ~ angelic ~ speculation, but Kylie even wrote “Angel baby” on an embroidery craft during her baby shower, which took place on January 14.

On July 23, Kylie posted a TikTok video featuring only her baby boy’s little feet as she walked over to their garden, which included a sign that read “Sage.” Fans took this as a hint at her son’s new name and took to the comments sections to share their thoughts.

“Sage is the name???” one user wrote. “Two S’s. Stormi and Sage,” another chimed in, whereas a third added, “That’s what I thought, so I came to the comments to see who else thought the same.”

However, many others pointed out that the name they read was likely just an indication of their garden, as Kylie panned the camera over to a second sign after “Sage” that read “Curly Kale.”

Come August, new theories about Kylie and Travis’ son’s name hit the internet! “Any clue on what Kylie ended up naming her baby?” one fan inquired during a Q&A with DeuxMoi. “Yes, I’ve heard a name, but I don’t know if it’s confirmed. Depending on how she spells it, the name could either be an adjective or noun,” the account replied.

Another theory is that the Instagram account may belong to another person. Kourtney Kardashian And Scott Disick‘s eldest son, Mason, leaked the name Knight Jacques Webster.

August 10, Corey Gamble sparked speculation that the baby’s name is Rav when he mentioned the name in Kylie’s birthday tribute post. “Happpppppy B day to the One of one’s. To My Ace thats always got my back out here in these trenches of life…. Thank you @kyliejenner,” he wrote. “Big Love HBD. & Thank you for all & my beautiful grand babies! Rav what up … ha.”

“He mentioned Rav. Who’s Rav? I immediately thought it had something to do with the little ol’ baby’s name,” one person wrote. Another admitted, “For a second there I thought they called the son Rav.”

However, others noted that Rav might be Corey’s nickname for Travis.

Will Kylie Jenner Announce Her Son’s Name on ‘The Kardashians’?

It’s unclear when the mogul will drop the big news. Kylie continued to tease her son’s name when she appeared to reveal the moniker to a superfan at a launch party of a new Kylie Cosmetics product on August 24.

Kylie Jenner and Stormi's Cutest Moments Together Will Melt Your Heart

While attending the event Colt Paulsen Kylie whispered into Kylie’s ear and she shared it on Instagram. “Kylie Jenner told me the name,” text on the screen read as the reality star covered her mouth to conceal the secret.

Kylie also seemed to share another clue about her son’s mystery moniker when she sang “rise and shine” at Colt’s request. The mother of two previously went viral in 2019 when she sang the phrase to Stormi.

In response to Kylie’s reenactment of the viral clip, fans rushed to the post’s comments section to speculate on the baby’s name. “His name is Sunny lol. Rise and shine!” one person wrote. However, another social media user guessed that the baby’s name is Knight.

While the TV personality revealed that she has not legally changed her son’s name while appearing on James Corden on The Late Late Show Kris on September 8,Fans were convinced that Khloé’s daughter, True Thompson, slipped during the season 2 premiere of The Kardashians.

“Hi, Snowy!” True said over FaceTime as her mom introduced her to her new baby brother. “His name is not Snowy,” the Good American founder quickly corrected. Fans were quick to conclude that 4-year-old True was confusing the newborn for her cousin, Kylie’s son.

“She’s associating the baby brother thing to Kylie’s baby since he was just born!” one fan wrote below the clip shared via TikTok. “That literally makes so much sense. When my baby was born, literally my niece thought it was her baby sister and called him her name,” another added, backing the theory.

During the chat she had with James Corden, Kylie revealed they “haven’t officially, legally changed the name.”

“It’s still Wolf, his passport’s still Wolf. But that isn’t going to be his name. We’re just waiting,” She added.

The season 2 finale of The Kardashians, which aired on November 24, Kylie explained when she would finally reveal her son’s name.

“My baby’s name is still Wolf,” the makeup mogul noted. “I’ll let you guys know when I change it. Maybe I’ll tell you guys in season 3.”

Still, nothing has been confirmed … or denied!